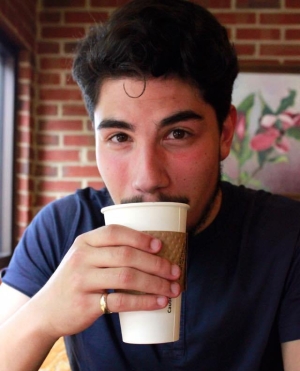 Hello humans of the internet, I’m back with a brand new interview post this time with a close friend (Schulz’s best friend to be exact) who is a musician and devote Christian currently studying business at USC.  That’s University of South Carolina.  Recently, very recently (literally today) his first single became available for purchase, so I’m kind of promoing him.  He’s awesome.

Joseph has been interested in music the whole time I’ve known him and much longer than that:

My dad bought me my first bass guitar when I was six years old.  Over the years, I learned other instruments as my family traveled from church to church playing music.  I started writing music in my junior year of high school.  Now, all those years of learning and writing has brought me to a place of passion and joy for my art.

“Can you tell me more about your writing process?”

My writing process is very odd in my opinion.  My songs stem from  repressed emotions or extreme situations of love and happiness.  A lot of my early songs were inspired by my high school crush, who shall not be named, but others were inspired by my experience as a musician.  Normally, I write my songs in under an hour while doing a repetitive task, such as taking a walk or sweeping the floor.  I start with a singing a simple melody, adding words, and finding the chords later when I get to a guitar or piano.

“Do you feel studying business is helpful in your pursuit of music?”

At the base of it, economics is the study of decision making.  You can take the same principles that apply to the production and  sale of goods, and apply if to what music you  should make.  When deciding what songs to produce and put on my upcoming album, I knew I couldn’t do them all.  I weighted the costs and benefits of each song, and took into account the opportunity cost of choosing one song over another.  This process helped me boil down my song list of over thirty songs to the eleven that I’m releasing.

“Is there a particular song that you wish you could include by chose not to?”

There are a lot I wish I could’ve included, but one in particular I was debating for a long time.  The problem was it mentioned someone close to me by name.  At this point, I don’t think they are ready to hear the song, but later on I might release it as a single or put it on the next album.

“What genre would you classify your music as?”

That’s the question of all questions.  Most people who know me and know my history of playing in churches assume that my music would be in the “praise and worship” genre.  It is not.  Don’t get me wrong, I am a Christian, and I thank God for the abilities He has given me , but He has blessed me with the ability to write secular music.  As far as whether my music is rock, pop, country, hip hop, it’s hard to tell.  I have some songs the rock the roof off and others that are a lot more chill.  I talked to Kenny McWilliams, who as been an amazing producer throughout this process, and he said to cover all the  different styles in my music, the best genre to lump it in is either pop or pop/rock.

And finally the question that I always like to leave on:  What is one thing that you really want the world to know?

No matter who you are, and no matter what is going on in your life, NEVER skip your morning coffee.  Coffee just makes everything better.

So that is a little bit about the super awesome Joseph Sanders and his music!  Please check out his work and his up coming alum “Standing Here” below are all of his links.

2 thoughts on “We’re All Just People On a Big Blue Planet: Joseph Sanders”