Hello Humans of the internet.  It’s Friday which means that the weekend is here.  It also means that I have a dysadventure to share with you.  (I mean I don’t know if this counts as a dysadventure because it’s not a specific thing that happened because of my dyslexia.  This is the post about fonts that I mentioned yesterday.

So apparently hating the font comic sans has become a bit of a meme.  Everytime that I go on the internet I see people saying how cringey comic sans is as a font.  My brother sends things like this to me: 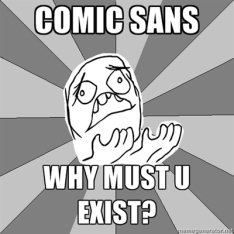 There’s a lot of hate for comic sans.  But, It’s my favorite font.  I know everyone who knows anything about design is disgusted with me and confused as to how I got a job in graphic design if I actually like comic sans how dare I.  I’m sure that people will accuse me of not really knowing anything about computers or living in the 1990s because why else would anyone like comic sans.  (That might have been a little extreme, but it does feel like that when I tell people that I like this one specific font).

For everyone who hasn’t quit reading out of disgust, let me explain why comic sans is my favorite font.  It’s the only font that I can read about 90% of the time.  Some times I just can’t read anything at all.  But, most of the time I can handle comic sans.  And a lot of times other fonts don’t look like anything to me.  Almost everything that I type I type first in comic sans so that I can make sure that I wrote it all correctly before putting it in to a more aesthetically pleasing font.  Sometimes I forget to change the font and that’s embaressing.  I once turned in an 8 page paper on one of Shakespeare’s history plays and it was still in comic sans.  Yes, the professor did comment on that and told me that it was not an appropriate font for the content of the paper.

5 thoughts on “My Favorite Font”