Hello lost humans of the internet!  Welcome to Dys-Adventures.  I haven’t written about any dysadventures lately.  This doesn’t mean that I haven’t been having my fair share of dysadventures.  I’ve just wanted to share all of my adventures in London with you.  Rest assured, I have been embarrassing myself, getting hopelessly lost and just generally bumbling through life.  This week I was going to talk about one of my many dysadventures, in this case getting lost trying to understand the Tube map, but on Tuesday, I had the actual best day of my entire life.  So, I am again going to talk about stuff that has no correlation with dyslexia.

I WENT TO PADDINGTON STATION!

I know what you’re thinking: “AK, what is so exciting about going to a train station?  They are super crowded and kind of stressful.”   Well, let me give you interneters a little backstory on this.

One of my favorite stories as a child was Paddington Bear by Micheal Bond.  For anyone who doesn’t know who that is, he is a marmalade loving bear from Darkest Peru that lives with a family in London and you should really read the books.  I had a toy Paddington Bear growing up who wore a sweater that said “Please Read to This Bear.”  I named him Girl Paddington Bear and dressed him up in a pink jumper.  (I actually still have him, he lives on my bed back home).  I love Paddington so much that for my 21st birthday I didn’t want to go out drinking, I just wanted to watch the new Paddington movie that came out last year (which i highly recommend).  But, moving on, you get it.  This is something that is very important to me.

On Tuesday of last week, I went to Paddinton Station and took pictures with Paddington Bear, of course. 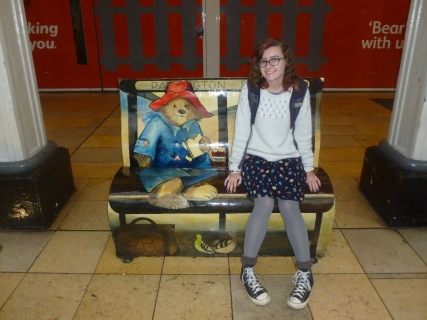 This bench, as well as a statue of Paddington are located on Platform 1 at Paddington station for anyone who is interested in finding it.  I had a hard time, but that was only because I couldn’t find to platform numbers.  If you’re like me: walk out of the tube station and walk straight until you get to the door, then turn left and walk until you see Paddington Bear.

Honestly, taking pictures with Paddington is the dream of child me.  There is also a shop in the station that was unfortunately under construction when I was there.  There was however, a small booth of Paddington stuff that was absolutely adorable.  It had the books, pencils, stuffed bears, stickers, pretty much anything you can imagine being Paddington themed.  Natually, I could not leave a booth full of Paddington stuff empty handed, so I took one with me (after paying for it of course).

This is my brand new Paddington Bear from Paddington Station.  I’m so excited, he even has the coat and wellington boots from the book.  I’m pretty sure that this was the best purchase of my life.  I would encourage anyone to go to the Paddington Bear shop at Paddington station especially if you love Paddington as much as I do.

I hope you all enjoyed this little adventure of mine as much as I did.  Do you love Paddington as much as I do?  What was your favorite thing when you were a kid?  Let me know, I’d love to hear about it.  I’ll respond to your comments and write another post next week.

Until then:  keep it weird,